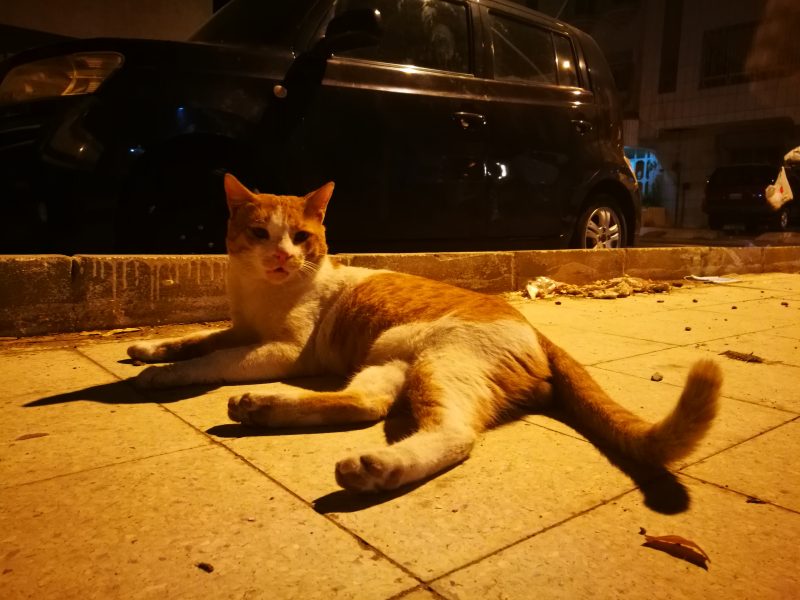 Crassus here. Reporting to you from Jeddah, specifically from under a palm tree next to a mosque. This is my corner. Yes,  mine. You don’t believe it? Ask anyone. Well, not exactly anyone. Victoria, for example, has no clue. And no, she shouldn’t find out I said that.

Where was I … Aha! My corner. I am the biggest, handsomest, and most importantly the most desirable Tom cat in this territory.

Why did I take over posting today, you wonder? Well, I blame my own immense kindness. Misha asked me if I could write something short and simple about myself, and I said I would do my best. How am I doing? Spectacular, I’m sure.

I’ve known Misha for about 8 months now. She used to go visit other cats in the nearby park. Then strange things started happening. All of a sudden there weren’t that many people outside, the cars also stopped moving around. It was at that time that I began to notice a new figure in our street. She came out every day with a bag, but there was no trash or leftovers in it, as it usually is with other people. She placed the bag on the floor, and from it a container of water and another sealed container. She emptied it in small piles of dry briquettes of some kind. My beloved, Matsa, told me that it was called cat food. Before her guardians left her outside on the road, she had it on her menu every day, this “cat food”. Matsa happened to be the first cat on our street to officially introduce herself to Misha. She was taking care of a kitten at the time, and for some reason unknown to me, this human woman was constantly trying to feed only the two of them. Well, we all got our portion, but I wanted to eat first. Makes sense, doesn’t it? Well, she wouldn’t let me. Unacceptable! “No, that’s not going to work. This stranger is interfering in our feline order,” I meowed.

And you know what? Misha dared to make fun of me! She laughed at my legitimate meow-complaints and started calling me Cry Boy! Every time she saw me and I started with my justified meow-protests, when I wanted to assert my meow-right to the first pile, she scolded me and called me a Cry Boy again. “But that’s my corner. My palm tree.” I stopped meowing monologues and began to despise her in silence. She served me an okay pile every time, but in any case I would sometimes push away one of the younglings for my second serving.

Months have passed. She came every day. And she also sat with us a bit every day. Well, with the younglings. I just joined them so I always knew what was going on. Myself, my beloved Matsa, Victoria … We slumped next to each other and watched this peculiar woman sit and caress every kitten, which was willing to trust her and then crawl into her lap.

Sometimes she would sit with us for a bit longer. At those times it happened that we could only hear the rustling of the palm branches, and after a few minutes some tiny, but extremely fast steps of a rat, which accidently stumbled too close, would be approaching us around the corner. When this happened for the first time, Misha looked at us with astonishment and her eyes were saying something like: “Why won’t you move after it?” Apparently she didn’t know about our deal with the rat gang. Well, the arrangement that applies only in the current state of plentiful leftovers: “As long as there is enough food for everyone, we leave you alone.”

Yes, she learned a lot in our company. Fortunately I allowed her to stay with us. Well, she’s quite alright, I’ll give her that. She even knows now that I am entitled to an extra pile sometimes, and she also calls me by my real name.
I agreed to a photo shoot this week. “It’s high time Mighty Crassus got some PR service,” I said to myself. My photographer was extremely professional, I was relaxed and trusting her completely. Her sincere emotional praise was, of course, to be expected. That is also one of the reasons, I agreed to write today’s post. She told me she needed time for new inspiration. New ideas for her letters. So I did her a favor and at the same time most likely brightened your day with my meow-story. You’re welcome.