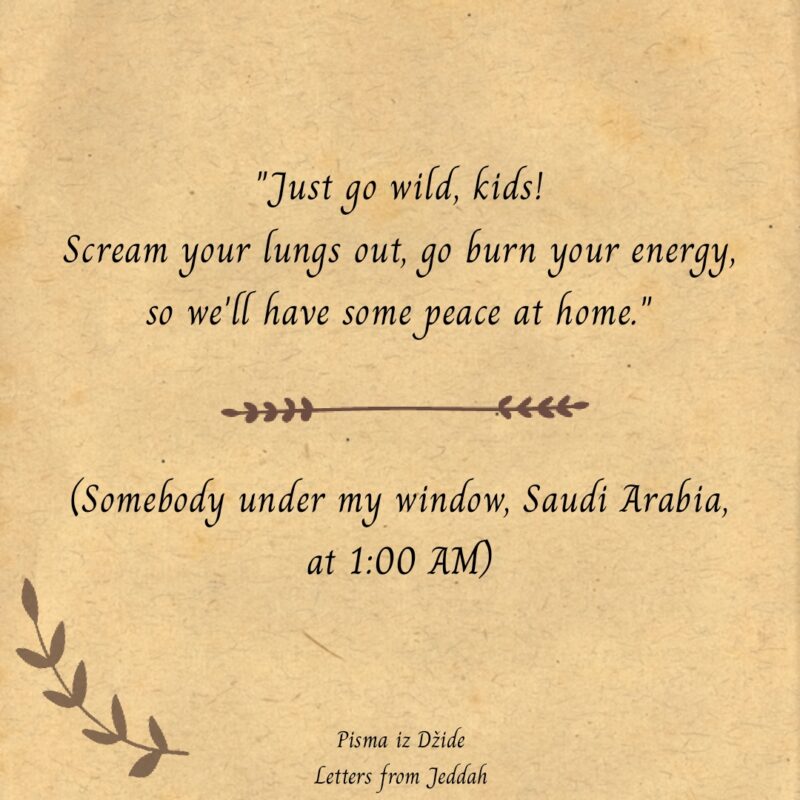 The weather is changing. Daytime temperatures are rising. It is not unusual for the locals to be more active at night. I have mentioned this before in my letters. Playgrounds and parks are full even at late night hours.

After a while I too have succumbed to adjusting my daily rhythm. Going to bed late. Especially in the summer, my husband and I go for recreation only at night, after that I come home soaked from sweat, like walking out of a sauna.

Yet I will never be able to understand the ego and selfishness of some people around me here. For the sake of their comfort, they are willing to sacrifice the serenity of all their neighbors, without shame.

A few days ago I, simply put, “totally lost it”. At one o’clock at night, I couldn’t sleep just because some parents from next door had a brilliant idea to “let their children loose” under our bedroom window. For the record, these parents were outside with them.

Tamer sometimes goes to bed even later than myself, so he was still in the living room that night. The alarm clock for the next (or better said, same day) was set at 5:30 AM because we were planning a trip out of town. So the decision was made that I just wouldn’t suffer this sh*t for another hour, so I opened the window and yelled into the night for them to shut up. There was even a curse word somewhere, because my patience ran out about 20 minutes earlier, when my glass of tolerance was overflowed with countless similar incidents in the past year, and I stayed silent, compliant to the foreign land and culture.

I did not this time and it paid off. Midnight scoundrels who were probably not used to being told off went silent. It is possible they experienced nothing like it before. Perhaps it will stay with them for next time.