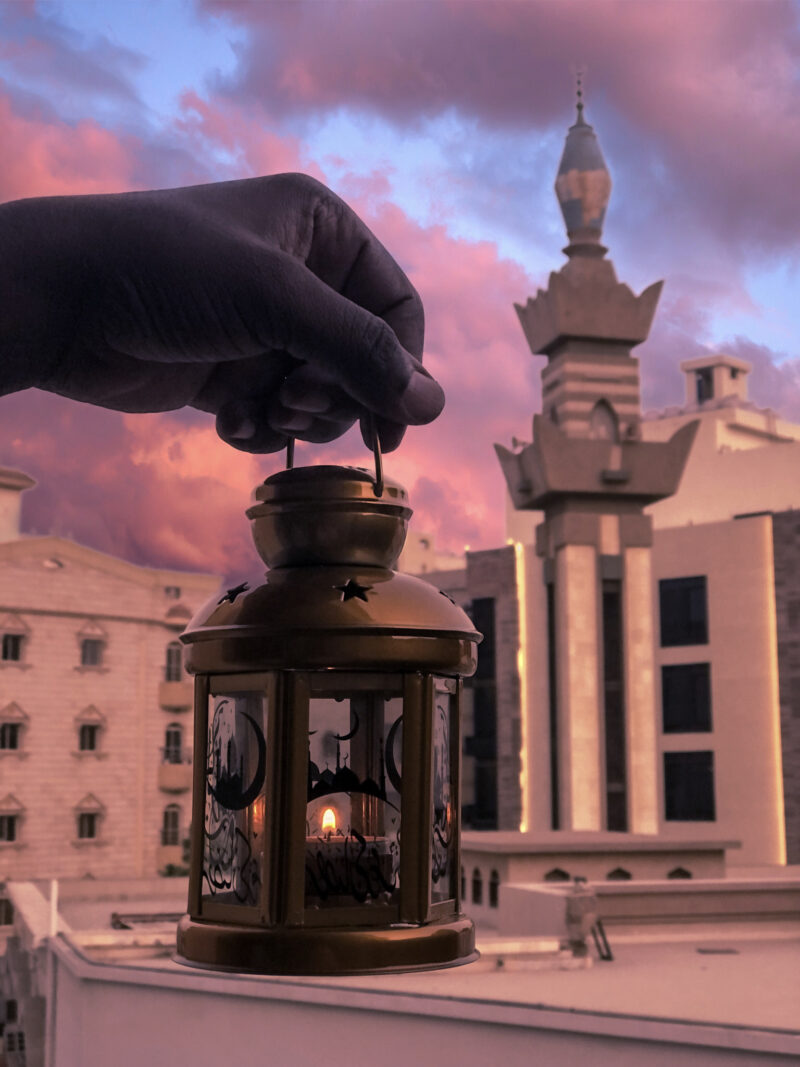 Ramadan is here. We wish you all the best from our balcony in Jeddah.

Today we drank our last afternoon tea, from tomorrow on we will treat ourselves to it after sunset. The month of fasting will bring challenges and sacrifices, lovemaking only at night, sweetness of dates as soon as we shall hear the sound of the adhan in the evening.

Ramadan Kareem to everyone. Let this Ramadan be generous, in English.

In the spirit of Ramadan, I want to share with you one part of a hadith, a narration from the Prophet’s companions, regarding fasting in this holy month.

Narrated Abu Huraira, The Prophet ﷺ said, “Fasting is a shield. So, the person observing fasting should avoid sexual relation and should not behave foolishly and impudently, and if somebody fights with him or abuses him, he should tell him twice, ‘I am fasting.”

Source of the hadith: Sahih al-Bukhari 1894

After a short break, I am fasting again. I had a severe case of tonsillitis and after I started to get better, I then got my period. All the good reasons for me to take the time off without fasting. I have to admit, the first day I started again was quite difficult.

Now it’s day 4. What a difference! It’s true, I am able to stay home. I can take time to rest. If only I wanted to. I really dislike sleeping during the day. One thing that is converting me into an incorrigible misanthrope is still our neighbors. Just before Ramadan started, a new family moved next door. Tamer says they probably had to be evicted from their previous apartment, and now they can scream all they want without any consequence, because they are related to our landlord (who still lives with his family above us, and the latter likes to move furniture and encourage children to do indoor sports in the middle of the night).

This is the side of Ramadan that puts me in a bad mood. I resent this selfishness with all my being, their audacity to affect others with their choice to live at night and sleep during the day. And no, we can’t afford a conflict. And so, I can only sleep in shorter chapters. 3-4 hours at night. Maybe 3 more in the afternoon. Today, for example, I didn’t sleep at all during the day. As I write this, I look at the clock so that I can fill the water cups in time and prepare a bowl of dates. A little over 10 minutes to the adhan left.

On the other hand: this month is being pretty good to us. Or is it just that our point of view is such that we can recognize blessings in everyday things?

How can you be sure, that you are mastering the Ramadan fast?

When the alarm wakes you up for sahúr and you don’t overthink what you’re going to eat. Leftovers from the previous day, freshly baked bread from last night with a spread or just oatmeal with nuts and fruit… Don’t forget some juice / smoothie and water.

And what’s the most important part?

You don’t panic. You are not gulping water down because you have been hydrating enough with various fluids beforehand. You don’t count down the seconds for the last sip.

Why? Because you live across the street from the mosque, from where the muezzin’s voice often echoes a minute or even two too early. Adhan means fasting has started, regardless of the exact time on your phone.

When that no longer surprises or upsets you, when you are calm and ready for a new day, then you know, “I got this.”

We ate a little less this month, but rested more on the other hand.

I kept up the habit and continued to learn Arabic, which I started during last year’s Ramadan.

We captured and took 5 feline neighbors for neutering.

We visited the park a few times, we also treated ourselves to iftar in a restaurant a couple of times.

And yesterday we finally went to the historic part of town again, to see the decorated streets with lanterns. We were delighted to discover a shop selling traditional sweets on the way, and so we stocked up for the upcoming Eid.

“Will we have these for guests or for gifts if we visit anyone,” I asked Tamer… The look in his eyes was telling me of a different plan.

When we got home, he had already opened the bag. “It needs a taste test,” he said.

So today I had to hide the sweet treasures, as I’ve done in the past. Being the house squirrel and all that. They can wait at least until the end of Ramadan! I placed them in… No. I can’t tell you. Tamer also reads my letters, so I have to keep this secret to myself – at least for another day.

“I’m afraid you were right,” he tells me while sitting behind the wheel.

We’re running late again. We were stuck in traffic, everyone rushing to the same destination – Eid prayer at one of the lovely mosques by the sea.

I, already in such a bad mood, was not making the situation worse. “Maybe we can reach another place on time, if there is one just as nice nearby…”

Oh, why was I frowning? Because I couldn’t wear my new abaya for Eid! It is customary to wear something new or the best you already have in your closet for such a holiday. However, because the dumbasses in the store overlooked and failed to remove the magnetic tag, it remained nailed to my new wide sleeve. So by wearing it like that, I would be mortified if anyone saw me in public.

“I can try breaking it with a hammer,” Tamer offered immediately. Alas, there was no time for such risks. We were already late for other reasons. I was convinced that, just like last year, e would be missing Eid prayer.

But Tamer did not give up, he managed to escape the caravan and tried to reach the nearest parking lot from a different direction. Successfully! And more importantly, on time.

There was an echoing sound of takbeer coming from the minarets of the nearby mosques, the wind was carrying “Allahu Akbar” from all sides.

My bad mood vanished completely when the imam’s voice sounded the prayer, much nicer than the one we have in our neighborhood. For such a voice, one would open a window on time for every azan and listen with pleasure day after day.

“What a beautiful morning. I’m glad we made it,” Tamer remarks as we are heading back to the car.

“Yeah, yeah. You did everything in your power, just so I would not be right again!” Good thing, I can be wrong sometimes.