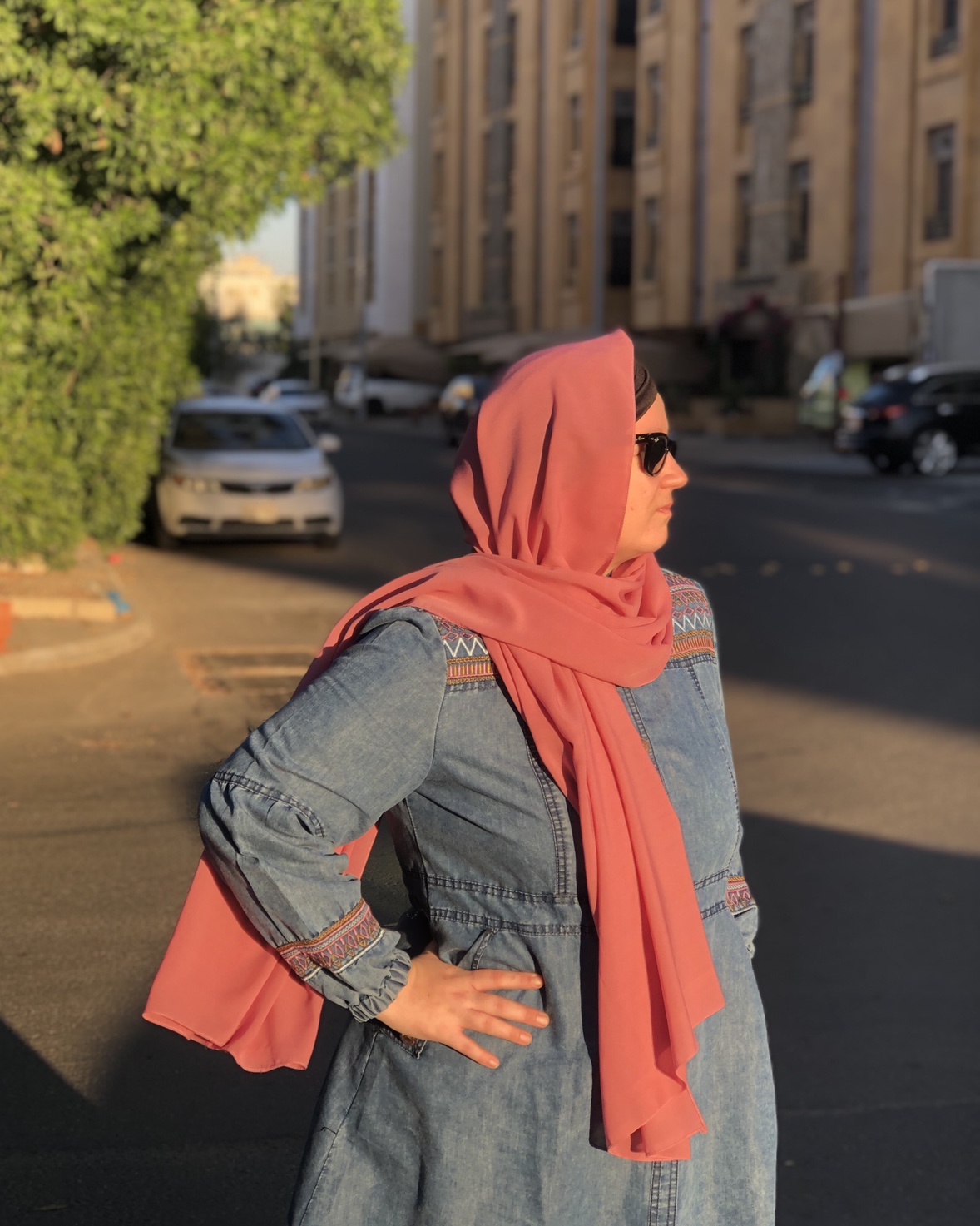 When I arrived to Saudi Arabia, now more than two years ago, I had only one abaya in my wardrobe. Gifted by my mother-in-law from Sudan. I soon hung a few new ones in my closet. During our first walks along the coast and in the nearby park, however, certain ladies caught my eye, their long denim abayas twirling in the wind. With extra pockets and buttons and sewn in patterns.

“That one. I want to have one just like it!”

Who would have thought that within this so-called conservative society I would find pieces of clothing that would have had me in awe even as a teenager… A long denim abaya, like some kind of a rockstar’s coat.

Well, the “right” one found me only recently, just before the new year. Better said, two of them did. Just for the holidays. I couldn’t decide on only one, so I took both. After two years of searching, one likes to convince oneself, this really isn’t careless spending… Is it?

“They will still have to be shortened a bit… Is there seriously no woman tailor in the city?”

I tried finding a seamstress a few times before on social media, women do this line of work in the comfort of their own homes. I haven’t been the most satisfied costumer with a couple of them so far. Men are the ones who have official shops with tailoring and sewing services. Can you imagine?

I always try the clothes on at home, and then I take them to the tailor along with the measurements. That’s how most people do it… This time I was a little disappointed with Tamer’s help. Who could blame him. The measurements were taken a bit half-heartedly, “come on, it’s fine, it doesn’t make a difference if they shorten it either 8 or 10 centimeters”… These two denim abayas can make me look amazing with the right length, otherwise I can end up looking ridiculous.

Forget if. I’ll just wear them over another dress, the tailor can then make proper measurements himself. And so we went. To our surprise and delight, the gentleman from Bangladesh did his job flawlessly. His neighbor has already let us down a few times with his repeated delays and an awkwardly sewn in zipper once. Tailoring shops, as it is customary in other industries, stand next to each other. This time we were satisfied with the work, the price and his professionalism. We went home reassured that we had finally found a tailor we can count on.

We went for a walk. Me in my new denim abaya, he in a tracksuit with a phone in his hand – “for taking my pictures,” I asked him.

We are the only weirdos walking these streets. Others drive to the park, promenade or a shopping center. We both prefer a calmer atmosphere and cats on every corner.

Of course, a road in a usually quiet neighborhood turned into one with busiest traffic, just when I wanted to pose “spontaneously”. The life of a fashion icon is really so damn hard.

This time I was the one losing my temper for a change, and Tamer had an unusually positive attitude, saying – why do you care if anyone is watching us.