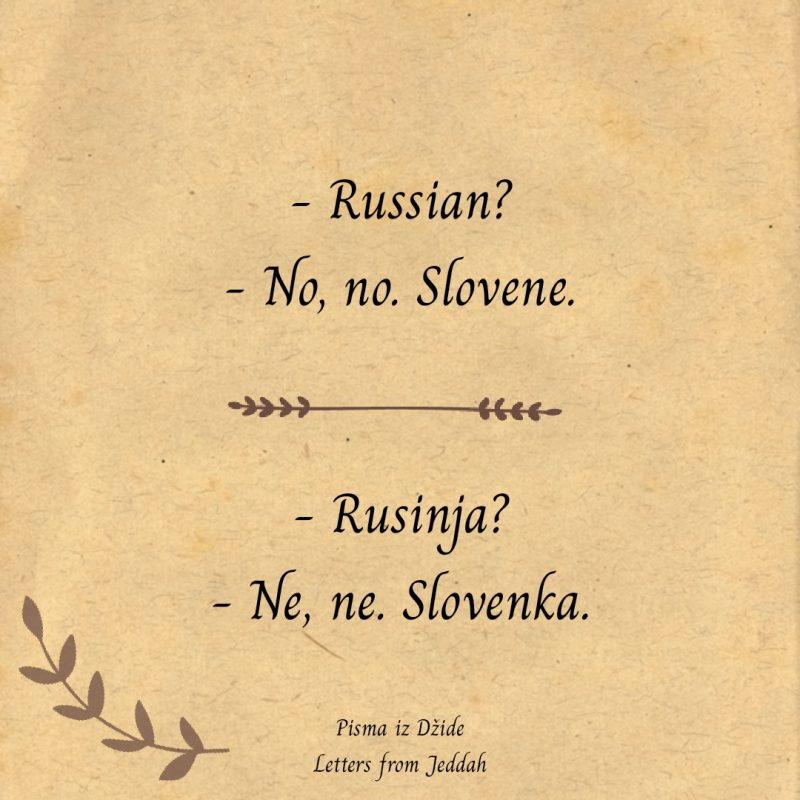 I ring the doorbell in front for the reception to buzz me in. I come covered with a face mask because we have to wear them in all public places; there’s also a notice for it on the poster before I enter.

Last time I was in a beauty salon it was more than 6 months ago, before we all fell under these safety measures. I came for a pedicure at that time as well. There’s another customer in front of me at the counter, I have to wait. I really hope to pass the whole thing with English because I’m still pretty shy with my Arabic. Last time I came with a friend who arranged everything in Arabic, I practically didn’t have to say a word.

Another woman appears in the reception area from the background. She approaches the receptionist and addresses me as soon as she notices me.

She caught me by surprise. Usually people here don’t quite know “where to put me”. Since I don’t have a typical Slavic accent, I often mislead them. Some do not differentiate between Westerners, and Slovenia is still unknown to them. In Sudan, for example, I was declared Turkish, but that’s only because white skinned Turks are most common there, and of course the country is not much visited by tourists. There was also my loosely wrapped scarf, which supposedly marked me as a Turkish lady.

But this woman, who I assumed was a Saudi, and maybe even the owner of the salon, took me for a Russian, therefore Slavic, after only a few seconds. Her assessment was even more surprising because she could only see half of my face with my blue eyes.

After a short exchange of pleasantries, I was glad to be able to agree on the price and service in English.

– 50 riyals for pedicure. But if you also decide for a facial and eyebrow coloring, then we can offer you a special promotion for 100 riyals.
– No, no. I just need a pedicure, having some issues with my toenails. I will surely come with a friend another time.

After a few extra attempts to persuade me to dye my eyebrows, I managed to convince them that I only need a pedicure. At the same time, I began to wonder what the hell was wrong with my eyebrows. Then I noticed that basically everyone around, employees and customers, already had a coat of paint applied to their eyebrows. Apparently I have no idea about the fashion trends or they had some excess in their coloring inventory.

After payment was made, I entered the back rooms, where I took off my abaya and also left my silk scarf with it on the hanger. It’s so refreshing to step into this closed world where women take off their veils and take time for themselves.

The receptionist escorted me to one of the employees, who was just taking a break and browsing her phone. I recognized the Filipina Lucy from last time.

I was really happy that she would be the one taking care of me and that’s what I told her. Then Lucy had another try at me with their special offer and nudged me for the eyebrows. With smiley eyes and hidden concern, I turned down the proposal one last time. Then she directed me to a pedicure chair and got to work. Strong and not so small Filipina grabbed my right and then my left leg with gestures of an experienced professional, one that no one dares or is even able to escape, especially when she works on you with the wooden foot file to such a tickling extent that made me wave my hands around and clench my fists. Luckily I wore the mask that kept my grimaces at least partially hidden. Lucy was visibly trying to suppress her grin.

Just like many months ago, she didn’t disappoint me this time either. I left the salon satisfied, my feet thankful to be light again. I just had to calm down my eyebrows in the mirror. “You’re fine.”