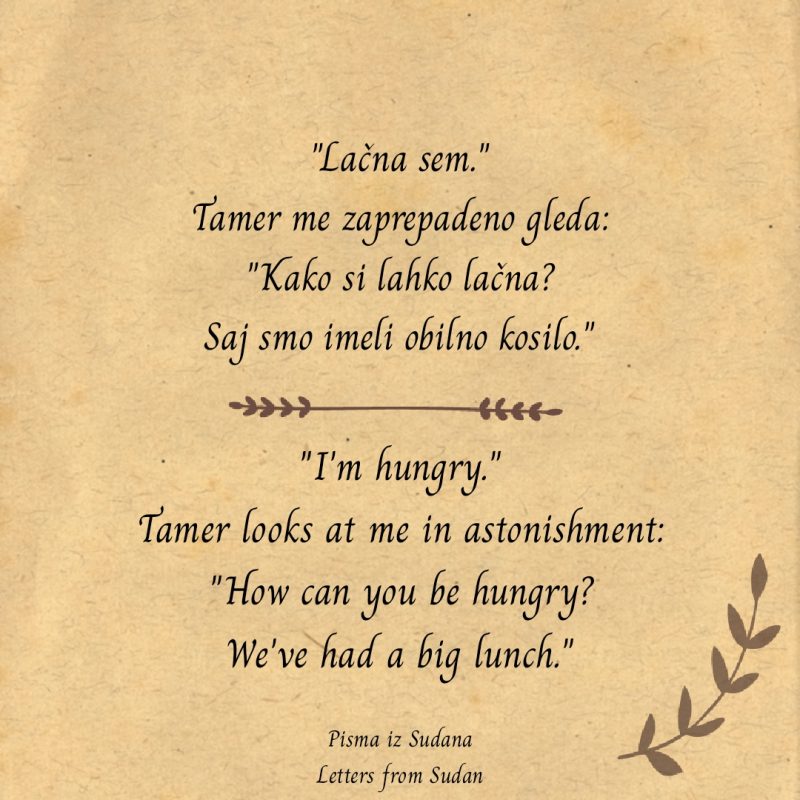 “I’m hungry.”
Tamer looks at me in astonishment: “How can you be hungry? We’ve had a big lunch.”

A big lunch or any other meal in a Sudanese household means two or three dishes with an unlimited amount of bread. Every bite of vegetable or meat sauce, every time they reach into the plate for a piece of omelette, meat or falafel, they do so with bread.

“I can’t eat that much bread. It’s not good for me, I feel it’s not,” I try to explain quietly so that no one else in the house would hear me and be offended.

“And that little plate of salad? I’d eat it on my own like it’s nothing if it weren’t for 5 other family members sitting around the food tray.”

I can see how confused he is, because home cooking always leaves him with a full belly. At the same time, I see shock and sadness in his eyes. He wants to put my well-being first, and for a few days he didn’t dwell much on his wife’s annoying complaints. He thought I’d just rather eat something else. He didn’t understand, and I didn’t know how else to explain it to him.

“Just don’t say anything to your mom, please. I don’t want her to be offended. I wouldn’t want to hurt her for anything in the world!”

He promised me he wouldn’t say anything. Instructed me that I just be more vocal on what I need. Some more bananas and tomatoes from the market No problem.

In the last week of our visit I ate really well in my Sudanese in-laws’ house. There was even more rice and vegetable sauces on the menu. My dearest mother-in-law, who supposedly doesn’t understand more than a few words of English, made sure that her daughter-in-law’s occasional crankiness miraculously disappeared.

Tamer swore to me that he had not revealed anything to her. And so it happened that, with more and more frequent surprising exchanges, when she addressed me with ever-increasing admixtures of English, I was forced to conclude that Mamma Niemat had a secret.

Turns out that she, in fact, had not forgotten English from her years at the university, or that her memory of it came back while her daughter-in-law from abroad was visiting again for three weeks.

I could only guess, however, whether she really heard my complaints, perhaps from another room or perhaps from outside the window in the backyard where she might have been washing the dishes. How embarrassing. Or just lucky?